That prehistoric fossil in your attic may be a tax break

•   Highly appreciated stocks and cash aren’t the only things you can donate. Some donor-advised funds and charities will take so-called complex assets.
•   Complex assets can include shares of private companies, cryptocurrency, collectible art and more.

Whether you’d like to give away several thousand bushels of soybeans or a prehistoric fossil, there just might be a charity that’s willing to receive it.

Year-end tends to be a busy time for individuals who are in a giving mood. Donors seeking a break on their 2018 taxes must make their charitable contributions before Dec. 31.

Keep in mind that it’s also harder to take the deduction for charitable giving, as the Tax Cuts and Jobs Act has roughly doubled the standard deduction to $12,000 for singles and $24,000 for married couples who file jointly and limited certain itemized deductions, including a break for state and local taxes.

As a result, fewer people are expected to itemize in 2018 and fewer individuals will qualify to claim their charitable donations on their taxes.

For those who can itemize, cash donations and highly appreciated stocks often are the items generous filers want to give away. However, these aren’t the only things charitable organizations are willing to take.

For instance, Fidelity Charitable received close to $1 billion in so-called complex assets in 2017.

“If you have stuff in your house you can’t wait to get rid of, you think it’s the most valuable thing in the world.”
-Tim Steffen, CPA, director of advanced planning at Robert W. Baird & Co.

This year, a farmer had a bumper crop of soybeans and made a gift of 3,400 bushels to his Fidelity donor-advised fund — a tax-advantaged account donors can use to deposit charitable contributions and make grants to their favorite causes.

The firm helped monetize the soybeans and fund the farmer’s account, Pirozzolo said.

Just like cash donations, donors can also claim a deduction on their taxes for their gifts. In 2016, 22.9 million income tax returns claimed a deduction for noncash charitable contributions, the IRS found.

Here’s what you need to know if you have an offbeat donation you’d like to make.

Perhaps one of the most interesting gifts given to the National Philanthropic Trust, a public charity, was a 17th century Huanghuali dining room set, said Eileen Heisman, president of the trust.

“The donor had been in the museum world,” she said. “We accepted the furniture and we were able to sell it.”

Though the organization wouldn’t reveal the exact value of the gift to protect the donor’s confidentiality, the Chinese furniture set was auctioned off and valued at “hundreds of thousands of dollars,” according to the trust.

Oceanfront property and a fractional interest in an orange grove in Southern California are among other donations the trust has accepted, said Heisman.

“These assets can be transformational,” she said. “Oriental rugs and jewelry can be used as charitable gifts if they have real value.”

Other items tend to be quirky — and their value may not be immediately obvious.

For instance, a donor gave Goodwill of Columbus, Ohio, a fish fossil from the cretaceous period — dating 145 million to 65 million years. A museum provided an assessment of its authenticity. 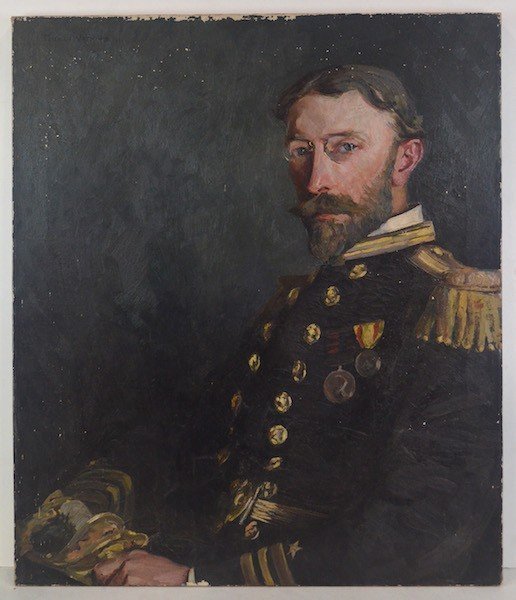 A Goodwill in San Diego received a gift of a 1911 portrait of Adm. Joseph Mason “Bull” Reeves, an early proponent of naval aviation, painted by artist Susan Watkins.

The organization put the painting up for auction, where it garnered a winning bid of $10,001 from the U.S. Naval Academy Museum in Annapolis, Maryland, according to Lauren Lawson, a spokeswoman for Goodwill.

Understand that just because you want to clean out your attic, doesn’t mean that a charity will want the contents.

Charitable recipients need to consider the nature of the asset, how long should it be held and the cost of maintaining it, as well as how marketable the item is, said Heisman.

“We have to figure out the exit strategy, how would we engage the buyer and how do we get it sold for fair market value,” she said. “We also ask is there anything about it that is untoward or unsavory.”

For that reason, the National Philanthropic Trust rejects about 30 percent of the illiquid assets it receives — including a donor’s attempted gift of an adult bookstore chain.

“It didn’t seem to be an asset we’d want to hold and sell,” said Heisman. “The nature of the business wasn’t a match for how we would define ourselves as a charity and the work we want to do.”

There’s also a limit to the extent you can nab a break for your donated oddity.

Both the Salvation Army and Goodwill offer valuation guides for common donations, which you can use to calculate your deduction.

As for unique items, each Goodwill organization contacts local and national experts to determine the value of the gift before it’s monetized for the charity’s use.

When it comes to your own taxes, you have to file Form 8283 with the IRS if you claim a charitable deduction exceeding $500 for noncash donations.

If you claim more than $5,000 for your donated property — excluding securities — you’ll need to send the IRS a qualified appraisal of the item, along with Form 8283.

Proceed with caution when providing the IRS with an assessment of your item’s value.

Read the full article on CNBC